As the old saying in kendo goes, “1. eyes, 2. footwork, 3. courage, and 4. strength” (一眼 二足 三膽 四力; ichi-gan ni-soku san-tan shi-riki), seeing is considered to be the most important.  The act of seeing is divided into two aspects (観見の目) one that of sensing or perceiving [as mentally] (観; kan) the whole of your opponent, and another is that of simply observing [as physically] (見; ken).

There is a saying, “eyes are the mirror of the soul.”  It’s possible to read a person’s heart through his eyes. If the heart is in disorder the eyes are murky, and if the heart is clean the eyes are clear. There are some who look at the target (men, kote, dou, or tsuki) before making a cut, and that is akin to relaying to your opponent where you are going to be cutting. So, if you want to read the other person’s intention you have to practice to observe your opponent’s eyes and read the heart.

You can sense the movement of your opponent’s whole body through his eyes. This is because the human field of vision sees best 30 degrees from the line that connects the upper part of the ears to the eyes. There are some who look at opponent’s tsuba or hand to avoid any attack, or focuses on the feet to see the movement, but you can’t track the movement of shinai with your eyes, and you can’t see the whole if you focus on one point.

Therefore, you should see as if you’re seeing a far-away mountain, and also see opponent’s eyes to comprehend your opponent’s whole (heart and mind).

* This is a translation from Jissen Kendo by Edo Kokichi kyoshi. 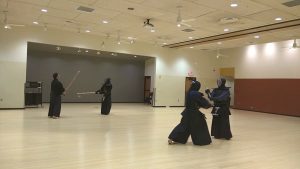 Oikomi: men, men-kote, men-kote-dou. We usually don’t practice going forward that much so whenever I instruct the class I try to put in oikomi or other practices that help with this. We start with a kiai, and then go on for continuous uchi in fumikomi. Near the end of dojo, we finish with shomen uchi and then zanshin. I felt light today, however, my left foot felt like it was being dragged along rather than snapping in for some reason. Sensei didn’t say anything about it, so it must look okay from the side.  This feeling may be due to the lack of practice of this sort.

Men-kote uchi felt natural, with the right distance for footwork coming surprisingly naturally even during the fast drill. I sometimes think this as a rather enchanting aspect of kendo. What was difficult before has finally become a second-nature, and it’s a satisfying feeling that you don’t commonly find in other aspects of life, except maybe in academia.

We ended practice with sensei’s instruction on hikiwaza and then jigeiko. I tried to focus on cutting somewhat explosively, but I was little too tired for this by this time. This is usually manifested by higher ranking kendoka who have been practicing for a long time with right chudan no kamae with proper suburi.

My energy level was excellent for this keiko.