There is a large fish named Gon (鯤) living near a corner of the North Sea. It is not known how many ri (approx. a quarter mile) in length it is. It transforms into a bird called Bung (鵬). The size of Bung is also not known. When it spreads its wings to fly, it covers the clouds of the sky with its wings, and it stirs water of the sea. It can fly from one end of the North Sea to the other end of South Sea in one breath. According to a story by Jehae (齊諧) it rides over the whirlwind of 3,000 ri and travels 90,000 ri without a rest, and then folds its wings in to take a rest.

Jang-ja had envisioned a world where both nature and self become one in harmony (物我一體). He had mentioned this bird to metaphorically describe the appearance of a great person who moves around in the freedom of an ideal world that goes beyond the mundane.

From the mention of this, we have words like bung-gon (鵬鯤), or gon-bung (鯤鵬) which signifies something large that is beyond what anyone can imagine. And bung-bae (鵬背: the back of Bung), or bung-ik (鵬翼: the wing of Bung) are used to refer to anything that is very large. Bung-ik is often used to describe airplanes. And words like bung-bak (鵬搏: the flapping of Bung’s wings), bung-bi (鵬飛: the flying of Bung), bung-geo (鵬擧: the rousing of Bung) all describes an act or spirit of achieving something with a great effort or initiative. Bung-do (鵬圖: the picture of Bung) means a great plan or aspiration. 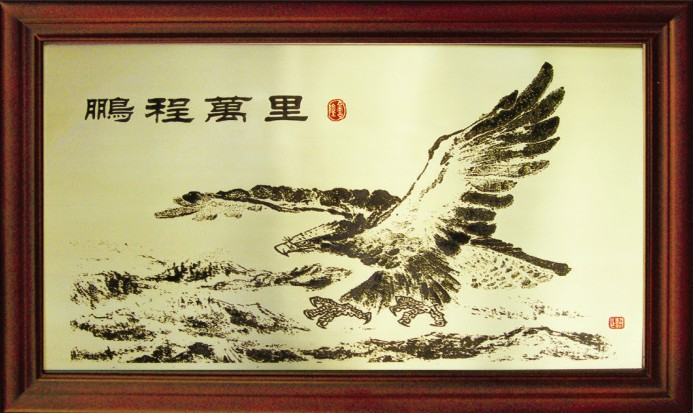