A fight of snail horns. A useless fight or strife in a small world.

During the Warring States period, feudal lords battled each other year after year for hegemony. The story comes out during such tumultuous time.

King Hye (惠王) of Wi (魏) formed an alliance with King Wi (威王) of Je (齊), but later, King Wi broke this agreement. King Hye was outraged over this, and wanted to send an assassin to kill King Wi.  The ministers of the court considered it cowardly to send an assassin, so some suggested to wage war instead, and some suggested against it. In midst of this, Hwa-ja (華子) suggested just the thought of waging war itself is wrong.

King felt frustrated and asked, “What do you suggest that we do, then?”

“We have to put aside quarrelsome arguments (是非) and stand on the side of the Way (道).”

The King drew a blank stare, and then the chancellor Hye-ja (惠子) called upon a sagacious person named Dae-jin-in (戴晉人) and had him stand in front of the king.  He first asked the king a question.

“Do you know what a snail is?”

“On its left horn is a country of Chok (觸氏; “pierce”) and, on its right is a country of Man (蠻氏; “barbaric”), and they were fighting each other to expand their territory. There were several tens of thousands of people dying. There were times when it took 15 days to just pursue fleeing enemies.”

The king was dumbfounded at this story, and Dae-jin-in asked another question.

“Do you think there’s an end to this world?” The king shook his head. Dae-jin-in continued.

“Then to those who ponder on this limitless world, the existence of these countries can only be trivial.”

He was basically saying that whether it’s the country of Wi, or the country of Je, they were both like countries on top of a snail’s horns from the perspective of someone whose mind ponder on great things such as the limitless universe.  Dae-jin-in asked this question and left the king.

“What difference are there between you, who is wondering whether or not to wage war against Je, and Chok and Man on the top of the snail horns?” 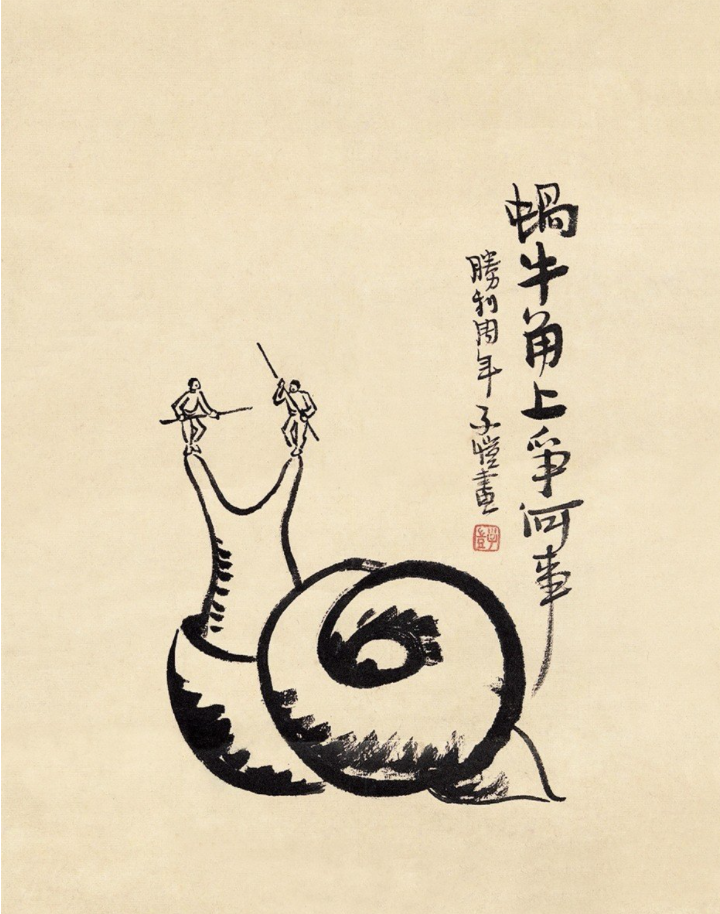