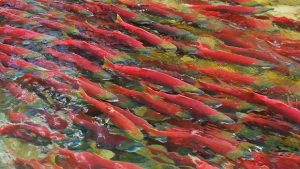 (Sorry, but the video is in Korean.  The documentary clearly brings awareness to Koreans who have been fooled by believing that the beef quality increases with the fat content. The most expensive beef in Korea are the ones with the most fat content.)

When I was growing up in Korea back in early 1980s, eating meat was for special occasions.  I’m not sure if that’s the real reason why there weren’t many fat people back then, but it’s a different landscape now. Although I have been living in the U.S. for over 30s year now, it seemed like a lot of Koreans ate meat on a daily basis starting at some point in recent past. I guess the price has gotten lower and people just oriented towards what tasted good for them. For a while, our own family didn’t eat that much meat, even though my wife is an ethnic Korean. She immigrated back in early 1990s. Anyway, after recently joining a local Korean American church what surprised me once again was how much Koreans liked sam-gyeop-sal (sliced fatty pork belly meat).  It’s basically 90% fatty bacon.  People usually consume it by frying it on a grill in front of them, and wrap it with a leaf of lettuce w/ chives and other side dishes with rice. Once or twice a year there would be sam-gyeop-sal party at the church. Koreans love meat.

The video on top is basically an exposé of how the Koreans value meat is strictly based on taste and not on the soundness of health. Basically, the beef certification system strictly based on how much fat beef contains. The higher fat content, the better beef, thus more expensive.  The documentary points out that such rating system started in the U.S., and then moved to Japan, the home of Wagyu Kobe beef, and then popularized in South Korea. It also features how Argentinians prefer lean meat, and compares the Korean beef cert system to the U.S. one. It also shows how Australians, preferring lean meat themselves, intentionally fattens cows to sell to Korea, a large meat market now.

How did Korea become such a meat loving country?  The answer lies in the not too distant past. Koreans were under dire poverty right after the war, and for many growing up during those years being able to eat meat was associated with well-being, and so that generation instilled in the next that eating meat, with little regard to health — which was taken for granted, thanks for their vegetable-based diet — is something that is promoted within families. In fact, it was only on special days that my father came home with cha-dol-bae-gi, thinly sliced beef, that was roasted on top of a frying pan.  However, all such factors contributed to where Korea is today.  A dumping ground for unhealthy meat. And paradoxically, it has also become a nation of health craze.  Maybe, it was only a matter of time that this type of exposé comes to the general public.

This is yet another documentary that exposes the other meat — pork.  Korea has been the dumping ground for the fatty pork belly meat.

Is this because Korean people in general are more gullible than other nations?